With the recent announcement of Hearthstone Goblins vs Gnomes, the game’s first official expansion, a slew of cards have been released (approximately one fourth of the total number of 120+). New cards mean new possibilities, a whole new metagame, new types of decks, new combos and fun ways to make your opponent ragequit.

Bear in mind that because we don’t know all of the cards, there might be new combinations which I can’t even begin to fathom when everything will be available. What I can do now is give my opinion regarding possible combos with the existing cards and the 30+ new ones and a preemptive ruling on whether a card is bad or not.

The stats aren’t good for the cost. It’s basically a more expensive Goldshire Footman with added Divine Shield. It doesn’t work for aggro decks because it’s inferior to the Unstable Ghoul, it doesn’t work for the early Blood Knight combo because for its cost you can play 2 Argent Squires. It’s an all around bad card, useful only in all-mech decks (although there might be better low-cost mechs than this to be released)

This card is great. In combination with an Acidic Swamp Ooze or Harrison Jones it can be a way to take control of the game (for example, eliminate your opponent’s weapon by replacing it with a new one and then destroying the new one). The stats aren’t great (5 mana for 3/4) but the battlecry is worth it.

5 cost for a 3/3 isn’t too good. The battlecry could be good if you can guarantee the kill, but all around it isn’t a good card.

This card is insane. The best possible scenario for a combo is this: the opponent has a full board, then you play Warsong Commander+Frothing Berserker+Bouncing Blade. The only risk is that the blade will hit the Frothing 4 times, however it is a risk worth taking. There are other possible combos of course, but this seems to be the best. It’s an excellent card and could be very powerful if used smartly.

This is basically a reverse Mountain Giant. It can be very good in fatigue decks, because you can play him for 2 mana if you fill the opponent’s hand. Otherwise, it’s very situational. (this card is a reference to The Iron Giant)

A fairly weak minion. His battlecry can give you one of the cards below. If you draw the Armor Plating you can make him a 2/2 for 2 (which is mediocre). The Reverse Switch is a 1-cost effect from the Crazed Alchemist, which is decent. Still, a pretty weak card. (Apparently now it’s not a battlecry, but a Deathrattle, which at least makes it a combo card with Undertaker)

This card’s description is a bit unclear (have it where? On board? In hand? In deck?), however it will be great in mech decks, but probably nowhere else. One combo could be Cogmaster+Coin+Clockwork Gnome into a turn 2 buff from the Spare Part. It’s an OK card, used inside future mech decks.

Dr. Doom reference out of the way, this is a pretty mediocre legendary. The Boom Bots (seen below) aren’t that great (1-4 damage to a random enemy isn’t a great Deathrattle) and 7 cost for a 7/7 is pretty steep. I wouldn’t recommend this card.

Another crazy epic card. In Shaman combined with Bloodlust and a full board it’s a game winner (if it gives Windfury). It’s great in zoo, great in minion-heavy Druid decks, all around great. The stats may be crap for a 4-cost, but the battlecry makes up for it.

I call this card the aggro killer. The only way the opponent can escape a board wipe after he has played early game minions is either a Shieldbearer (which no one drafts) or a silence (which then can’t be used on your later stuff). It’s great fighting the right opponent.

Useful is your opponent has just played Chillwind Yeti on an empty board or to finish off that last minion left after a Flamestrike. It can have its moments, but on the whole it’s not an indispensable card.

Why would you have this card? Would you risk transforming your Ragnaros or Cairne into a Chicken? The only way I can see this card being used is when you have a few spells left in your deck which you need and you’ve already drawn all of your major minions. This is at best a late-late-late game card, when you have less than 10 card in your deck left.

This is a powerful Mage card, especially with a Harvest Golem (which will become a Mech) played on turn 3. The only downside is that it can be killed by a Swipe, Wrath+Shapeshift, Frostbolt+Fireblast, Shadow Word: Death, etc… The stats aren’t the best, but you can clear the board with a bit of luck.

The stats are as bad as the card above, however this card has the potential to kill a Chillwind Yeti if the RNG is right. It’s a bit worse than the Mad Bomber, but decent all around.

This card will be one of the centerpieces of any Mech deck. You play 2 of these on turn 3 and any 2-cost mech can be played immediately. It will be insane if used right.

This is a pretty bad Legendary. The stats are all wrong, Leper Gnomes will be inconsequential in the late game and the cost is too much. You could make a case for double Mechwarping it on turn 7 (6 with coin), but it’s still not good. One of the worst late game legendaries.

The interesting thing about this card is that it gains the attack at the start of every turn (your enemy’s included). So, if your opponent can’t get rid of it, you will have a 3/2 on the turn following you playing this. It’s a decent early game card, a must in future mech decks.

Even stat-wise, this card is great. But when we get to the power… The combo I see here is the following. As a Rogue, keep the coin until turn 10 and make the following play: have 2 mechs already on the board, Loatheb (to prevent Flamestrike or other crap), Mimiron’s Head, Coin, Conceal. As a bonus, the following turn double Cold Blood on V-07-TR-0N and Faceless on it to make your opponent squeal and ragequit. 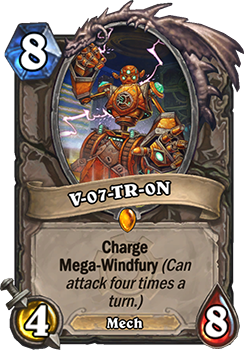 The only good thing I can say about this card is that it can’t be Shadow Word-ed. 4 mana for a chance at a 2-drop is not great. A pretty bad card.

On the other hand, this one is a great card, because 4-drops are generally good. It’s a worthwhile card.

This card is just insane. Imagine killing a powerful creature with your Ogre or Alextraza and then getting a fresh 6 or 8 drop. It’s random, but when played on later game creatures, it might yield great results.

This was, of course, added so that Priests can finally Shadow Word Pain Yetis. It’s a decent Priest card which can have some utility value.

This card is pretty hit and miss, considering that you could get Rivendare or Manastorm on turn 9. On the other hand, you could get Ysera, Rag, Sylvanas, Cairne, etc. The stats are bad, so the deathrattle is all that matters here.

I like to call this the mini-Yeti, because it is the Yeti with all the stats and cost reduced by 1. The only problem is that it’s susceptible to different combinations of spells and hero powers that the Yeti can survive.

This card will be great in Mech decks, or even in non-mech decks. You could Coin+Harvest Golem on turn 2 and on 3 unleash this guy and get a 4/4 and a potential buff, making it a 4/5 (aka Yeti).

Who wouldn’t want a 2-cost Sylvanas or a 5-cost Ragnaros? I consider this card fantastic.

Is this the birth of the Priest mech deck? Only time will tell. The stats seem a bit iffy, however the battlecry might give rise to some interesting plays.

This can work very well with Wild Pyromancer, Holy Smite, Holy Nova, etc. It’s a great Priest spell and will be very useful.

Also, here are some more opinions on the new cards: